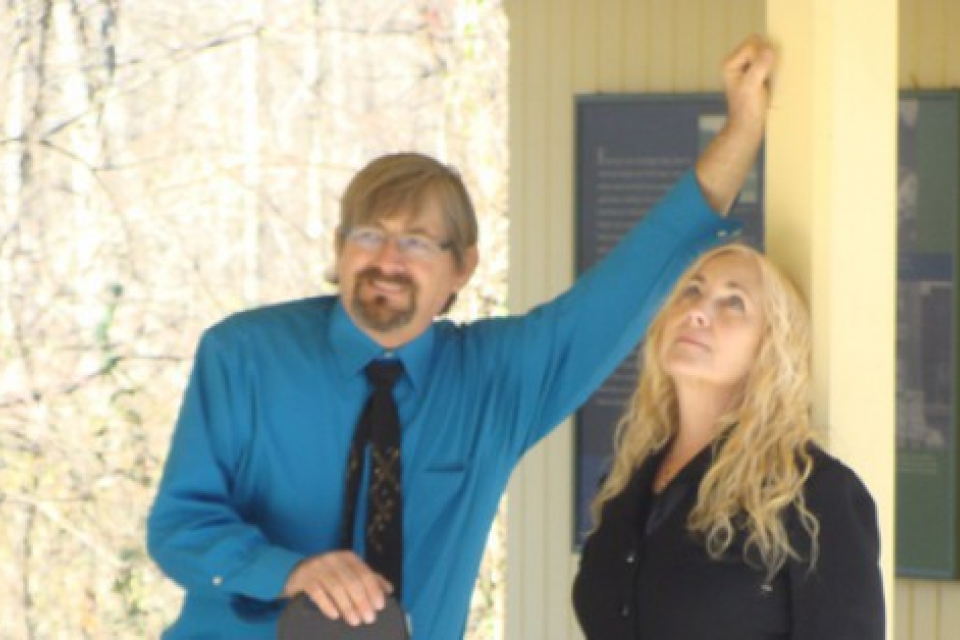 David and Valerie Mayfield don’t shy away from associating themselves with their more famous offspring. The couple makes it a point, they told The Daily Times a couple of years ago, to tell fans that they are indeed the parents of singer-songwriter Jessica Lea Mayfield and David Mayfield, bandleader of the David Mayfield Parade. “We want them to come see us and see where (the kids) got their talent!” David said with a laugh. “Right now, we’re on tour together as a duet, and we’re calling it ‘The Kids Aren’t Holding Us Back’ tour, because we think we’re a lot better without them!” He kids, of course — the Mayfields would be falling down on the job if they didn’t spend some of their empty nest years giving their children a hard time. But the music he and his wife make together stands wholly on its own, anchored in the musical journey they’ve been on together for 35 years.

If you are into the Americana/roots music scene, you probably know David and Valerie Mayfield’s kids. Son David Ray Mayfield leads The David Mayfield Parade. Daughter Jessica Lea Mayfield has 4 acclaimed albums under the belt at age 23. If you’re a little deeper into their music, you probably know that both of the Kent-based siblings began their professional music careers playing with their parents in a touring bluegrass band called One Way Rider they also toured and lived in a old touring bus once belonging to “Bill Monroe”  a 1956 flex, known as (The Bluegrass Breakdown) The parents now perform as a duet, proudly billing themselves as “The Parents of David Ray Mayfield of The David Mayfield Parade & Jessica Lea Mayfield.” Those who like their kids’ music should be curious to hear their parents and see where all that talent came  from. Now they have been names "The Bluegrass Sweethearts"  which is a perfect name for them, they still like to mix some classic country into their act also...

Valerie asked David about "what do they mean about our comical banter hon?"  David replied "us hon, they way we talk to each other, and Valerie says, " Oh you mean they think it is a act?"   The way David and Valerie are on stage is a true please to watch... they are truly being themselves... I guess if you have been married a 136 years and husband David says, you can see the sweetheart comedy act of a true talented married couple...

David  and Valerie Mayfield first met some 35 years ago at a Bluegrass Festival in Mantua, Ohio...

Valerie did not realize that David was a musician that first night that she met him, she saw him standing across a bonfire at the festival..and she thought "hey, he is kinda cute", and then she noticed that he was looking right at her too.... they immediately started walking right towards each other , then they introduced each other and while doing so took each other by the hand and remained holding hands for most of the evening... while walking back to Valerie's brother's campsite "her brother "Larry Sergeant" was standing there playing his banjo in a heated jam session after performing on stage earlier that day, suddenly he stopped playing when he saw his sister " Valerie" holding hands with "David Lee Mayfield" and he started yelling ! Yes! yes! that is the man you should marry, he is the best guitar picker and singer I have ever heard!! Valerie turned towards David and said to him"your a musician"?  David turned  to Valerie and said "your a musician"?   It was fate, that is a true story, and they got married and began playing music together... later on they put together a full 7 piece band, and had a lot of gigs playing for different venues and clubs.. they landed 3 house gigs... and ended up performing 6 nights a week with Weds. off... they had 3 children..... David Ray Mayfield, Amanda Lynn Mayfield and Jessica Lea Mayfield. Later on as the kids got older they changed format and  went with the family bluegrass band, and first was 12 year old David Ray Mayfield started on bass., then later on 8 year old Jessica Lea Mayfield joined the band... then the last to join the band was their oldest daughter Amanda Lynn, who played the 5 string banjo..They Toured in Bill Monroe's old tour bus that was a 1956flex...which he had nicknamed (THE BLUEGRASS BREAKDOWN) The family sold everything they owned except the clothes and their instruments and moved to Nashville, Tn... There they worked 3 shows a day 5 days a week... Little Jessica even sold her hand made jewelry on the side of the stage... The family band played The Nashville Palace, Tootsies, Ernest Tubbs Record Shop, Gibson Guitar Cafe, and played many festivals on the road, Poppy Mountain Bluegrass Festival, Bean Blossom, and many many more... The kids began their own solo careers back in 2007 and even have been on David Letterman... Jessica is now with ATO Records and David is with Compass Records... make sure and check them out at  www.facebook.com/jessicaleamayfield   and also www.facebook.com/thedavidmayfieldparade    and don't forget to like us on facebook..

It wasn’t too long ago the Mayfield family band One Way Rider was traversing the country, playing bluegrass and old-time music before the genres became hip thanks to bands like The Avett Brothers and the Old Crow Medicine Show who are also good friends with The Mayfield's....

“We’re on Facebook and Youtube constantly, just watching what they’re doing on the road,” said the elder David Mayfield, calling from his Newton Falls home. “We’re just very proud as can be of them. We have posters of them all over the house.”

Even though the Mayfield Family band is no longer touring, David and Valerie remain busy, they just completed   making an album with their son, David Mayfield who is also "a grammy nominated producer" their CD was made in their son's studio called "Tiger Spa"  located in Nashville, Tn.. The new is CD is titled  "Steal My Heart"

As for the couple’s style, it’s steeped in old school bluegrass and classic country and newgrass,  has been compared to the likes of Loretta Lynn, Conway Twitty, Dolly Parton , Tony Rice, The Dillards, Keith Whitley, Patty Loveless, Vince Gill, Merle Haggard and many more, but most importantly is that they have their own sound, and it is fantastic!   Tight harmonies and hold on for some fast picking too!

“It’s that kind of deal,” Mayfield said. “We just do songs that we like, including a couple of funny songs that I wrote. It’s just a lot of harmony and fast picking, even though we’ll slow it down and do some beautiful  love songs.”

Among the group’s humorous tunes are “Stomp on My Heart,” “100 Years Ago” and “Seven Drunken Nights.” There are also traditional bluegrass songs such as the upbeat “Old Home in Virginia” and the mellow “Guess’ River.”

No blog posts to show.

David and Valerie Mayfield a bluegrass dynamic duo! They are the parents of

Originaly the whole family toured and performed together and still do from time to time,  ...By popular demand of fans, friends and promoters.   Their children have performed on David Letterman, and toured  internationally and nationally...

David and Valerie Mayfield Bluegrass Sweethearts our on tour now!!!!